The Library of Congress > Read.gov > The Exquisite Corpse > Episode 2 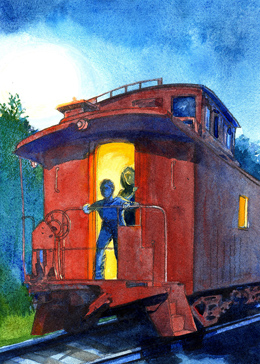 “Do?” said an ominous, yet familiar voice outside their berth. “There is nothing you can do, kiddoes. In exactly forty-seven ticks of the clock, this train will come to the final bridge, and I do mean final!”

“Boppo?” Joe stuck his head out between the curtains to see the painted face and bright red nose he thought they'd left far behind. “What are you doing on this train?”

Boppo laughed. It was an evil unclown-like sound that sent shivers down our heroes' spinal columns. “Did you think you could run away so easily? But, no time to chat. I have to de-train before de train de-molishes.” And with that Boppo raced away in the direction of the caboose.

“Pull the emergency cord, Nancy!” cried Joe as he leapt from the berth and gave chase.

Nancy yanked the red handle above the berth. Almost immediately the great train shuddered and squawked to a stop. In the distance she could hear it - a gigantic explosion. She pushed her way down the aisle that was quickly filling with passengers, furious at being so rudely awakened. She found Joe staring off the back of the train. Boppo was long gone.

“Nancy, we've got to get off this train. Now. While it's stopped.”

“And not warn the police about Boppo?” Nancy was horrified. “No,” she said, “first we need to make an anonymous tip. If only we had a cell phone.”

“There are lots of people milling around,” said Joe. “I'll pickpocket a phone.”

Joe had picked up a lot of useful tricks working in and around a circus.

“That's dishonest,” said Nancy, who was highly moral, “but I guess it's better than letting potential killers get away.”

A phone was appropriated from a passenger in the dining car and the authorities were called. With a clear conscience, our noble twins left the borrowed phone on the rear platform, climbed off the train, and walked forward past the stalled engine. Ahead in the moonlight they could see on their left the shining rails upon a second railway trestle and on the right the twisted metal remains of the bridge their train had been scheduled to cross.

“Now what?” said Joe, peering down into the deep gorge that lay beneath the once-twin spans. “It would take us hours in broad daylight to hike down and up this chasm, and we'd never be able to swim that roaring river at the bottom anyway.”

“Fortunately, the moon is bright,” said the valiant girl, “and having been raised in a circus, we are expert tightrope walkers. We will walk across the surviving bridge.”

“Naturally,” said Nancy. “Take off your shoes. We'll do it sock-footed.”

We won't say that Joe was afraid, but he was a better pickpocket than acrobat. Still, by humming a cheery tune and never, ever once looking down through the gaps between the ties into the abyss or to the side at the mangled wreckage of the destroyed bridge, he managed to follow his sister across the treacherous rail.

“Well,” said Joe. “That wasn't so bad. Now all we have to do is follow the clues, find the pieces, and put together the Exquisite Corpse and rescue our parents.”

“Look at the birthday card again,” said Nancy. “See if it gives us any clue to begin with.”

“Perhaps I can help, dearies.” Coming toward them out of the night shadows was a sight so frightening it was almost enough to make them turn and race back across the ominous gorge.

The National Children's Book and Literacy Alliance and the Butler Center for Children's Literature at Dominican University have developed a companion educational resource center  to support “The Exquisite Corpse Adventure.”